Wahl announces the new Barber of the Year 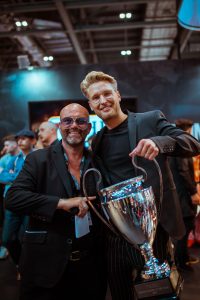 2016 saw the first female winner, Andrea Raymond. The judges were so impressed that they presented her with a contract and a place on the Wahl Artistic Team. The standard continues to improve and last year the competition was fiercer than ever, so we’re already excited to see the submissions for 2019!
Simon Shaw, Wahl Global Artistic Director says, “Wahl’s British Barber of the Year and Barbershop of the Year have become two of the most sought-after titles. Last year’s winner became a full Artistic Team member and is now travelling the globe, so it just goes to show the doors that this can open.”
This year’s winner was James Beaumont, a Keune ambassador and global educator and winner of the Male Fashion Collection category of the NHF 2017 Men’s Photographic Stylist of the Year.

Speaking about James, Simon said: “The competition this year was amazing and the talent on show was the best I have seen, which made the way James won an even bigger achievement.
“There was no question about who the winner would be. He raised the bar with his skills, presentation and technique. He is a worthy winner and has a great future in store. I am looking forward to working with him.”

This website uses cookies to improve your experience while you navigate through the website. Out of these cookies, the cookies that are categorized as necessary are stored on your browser as they are essential for the working of basic functionalities of the website. We also use third-party cookies that help us analyze and understand how you use this website. These cookies will be stored in your browser only with your consent. You also have the option to opt-out of these cookies. But opting out of some of these cookies may have an effect on your browsing experience.
Necessary Always Enabled
Necessary cookies are absolutely essential for the website to function properly. This category only includes cookies that ensures basic functionalities and security features of the website. These cookies do not store any personal information.
Functional
Functional cookies help to perform certain functionalities like sharing the content of the website on social media platforms, collect feedbacks, and other third-party features.
Performance
Performance cookies are used to understand and analyze the key performance indexes of the website which helps in delivering a better user experience for the visitors.
Analytics
Analytical cookies are used to understand how visitors interact with the website. These cookies help provide information on metrics the number of visitors, bounce rate, traffic source, etc.
Advertisement
Advertisement cookies are used to provide visitors with relevant ads and marketing campaigns. These cookies track visitors across websites and collect information to provide customized ads.
Others
Other uncategorized cookies are those that are being analyzed and have not been classified into a category as yet.
Save & Accept
Powered by